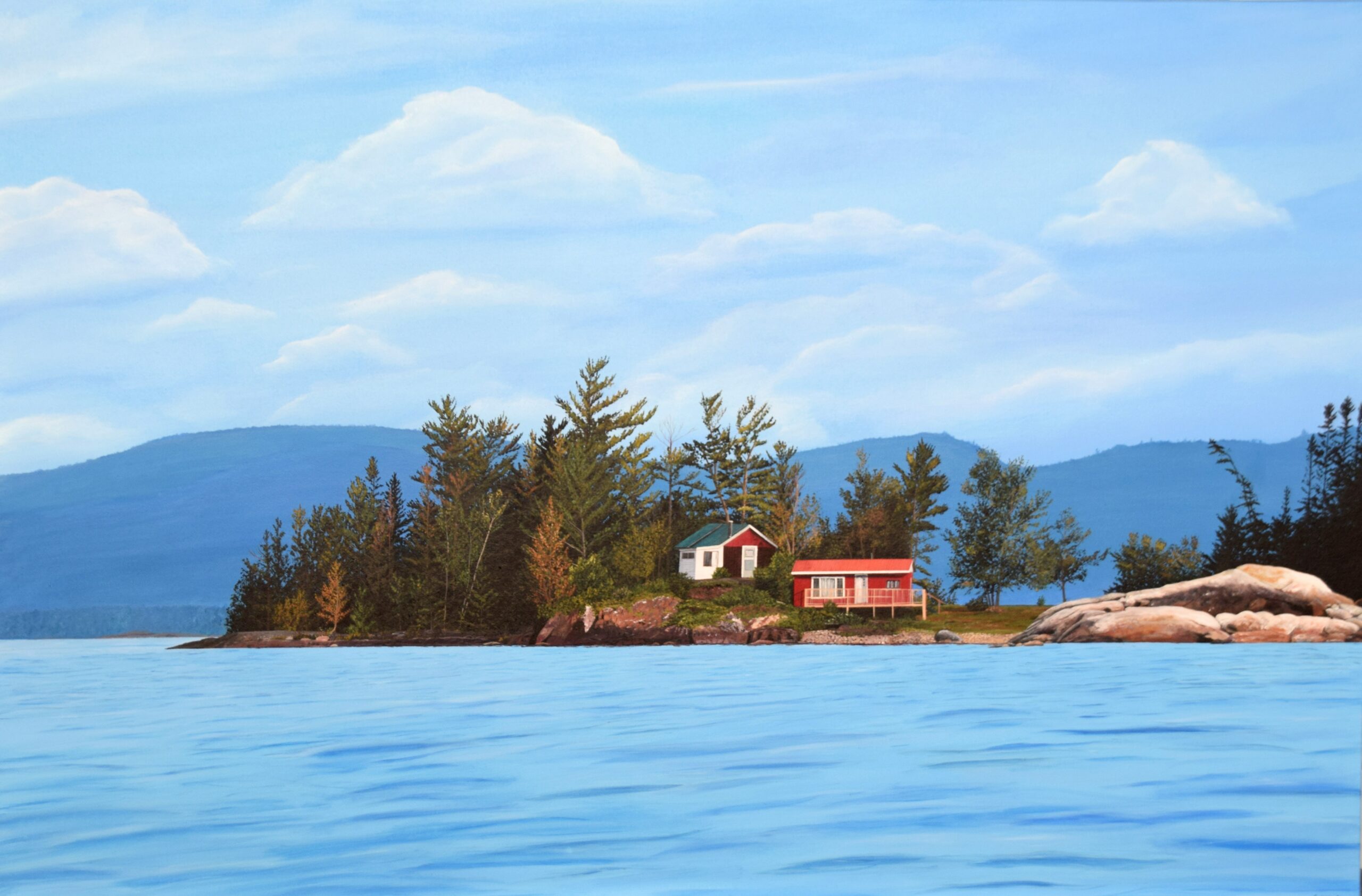 Naturally, after the worst month of the year, the next month should be the best of the year. This is easy, right? 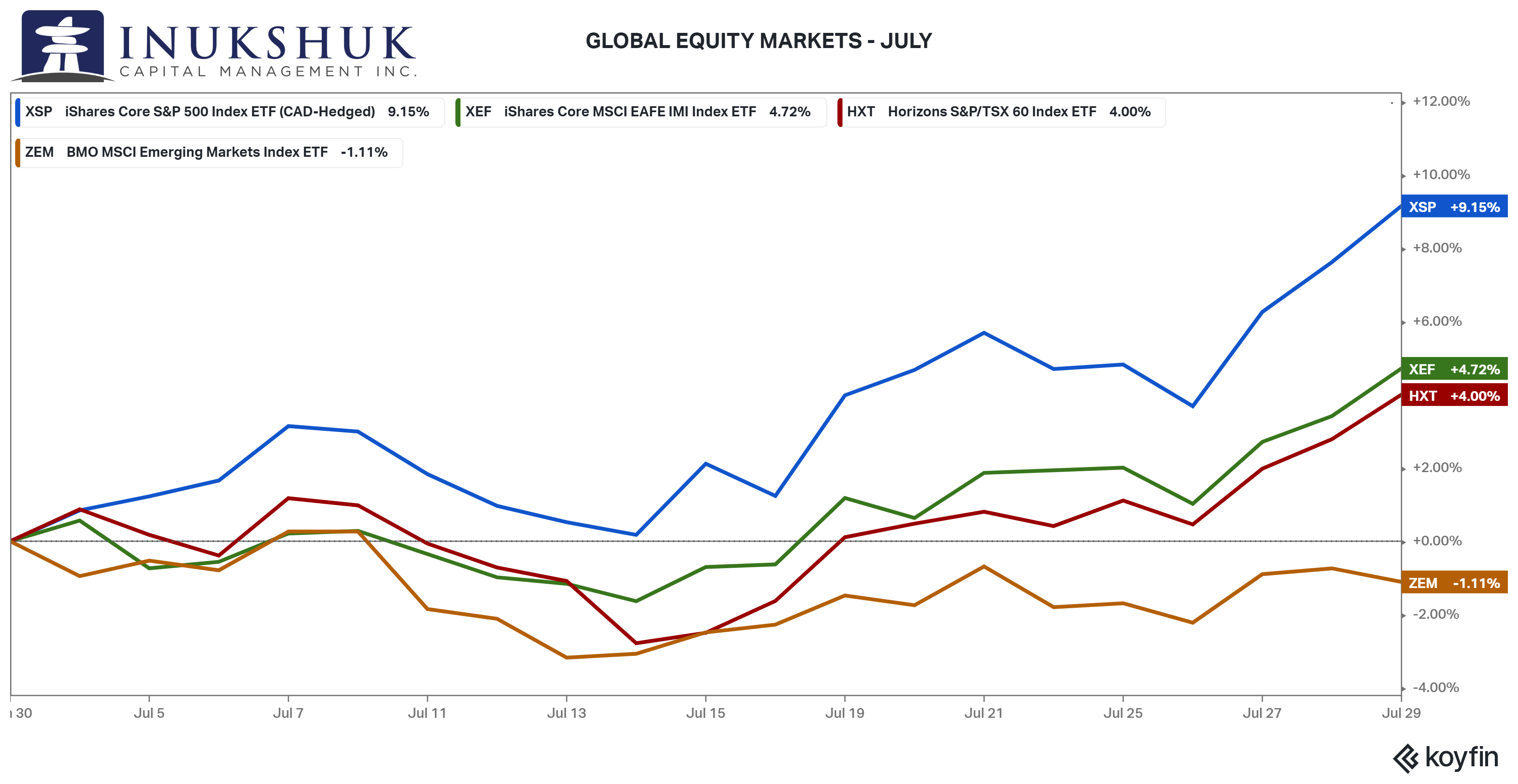 In May, our active program raised cash to flatten the allocation to the four major equity indexes we trade: the S&P/TSX60, S&P 500, EAFE (Europe, Australasia and Far East) and Emerging Markets, the latter two for more than a year. The sell levels in HXT and XSP are still looking good, but not as good as they did mid-June when the S&P500 was down 24% from the all-time-high in January.

We will have to wait and see if this rally has more legs but, so far, our signals remain cautious despite the early-August rally. You can read more about how our strategies work in last month’s note, here.

SELL IN MAY AND GO AWAY

There are many sayings in the markets. It’s the language of the puzzle that traders have been trying to solve for hundreds (thousands?) of years. Sell in May is a well-known one, but is it true? Like anything associated with markets and human behaviour, things can be partly true. There is an argument that some of the weakest months of the year for equities are from May to November. So a simple strategy The Stock Trader’s Almanac suggested that would work on a tactical basis is to reduce stock market holdings in those months and buy back in November. It’s interesting that our models, which are independent of seasonality, sold out the last of our active North American equity holdings in May. But it is just a coincidence. 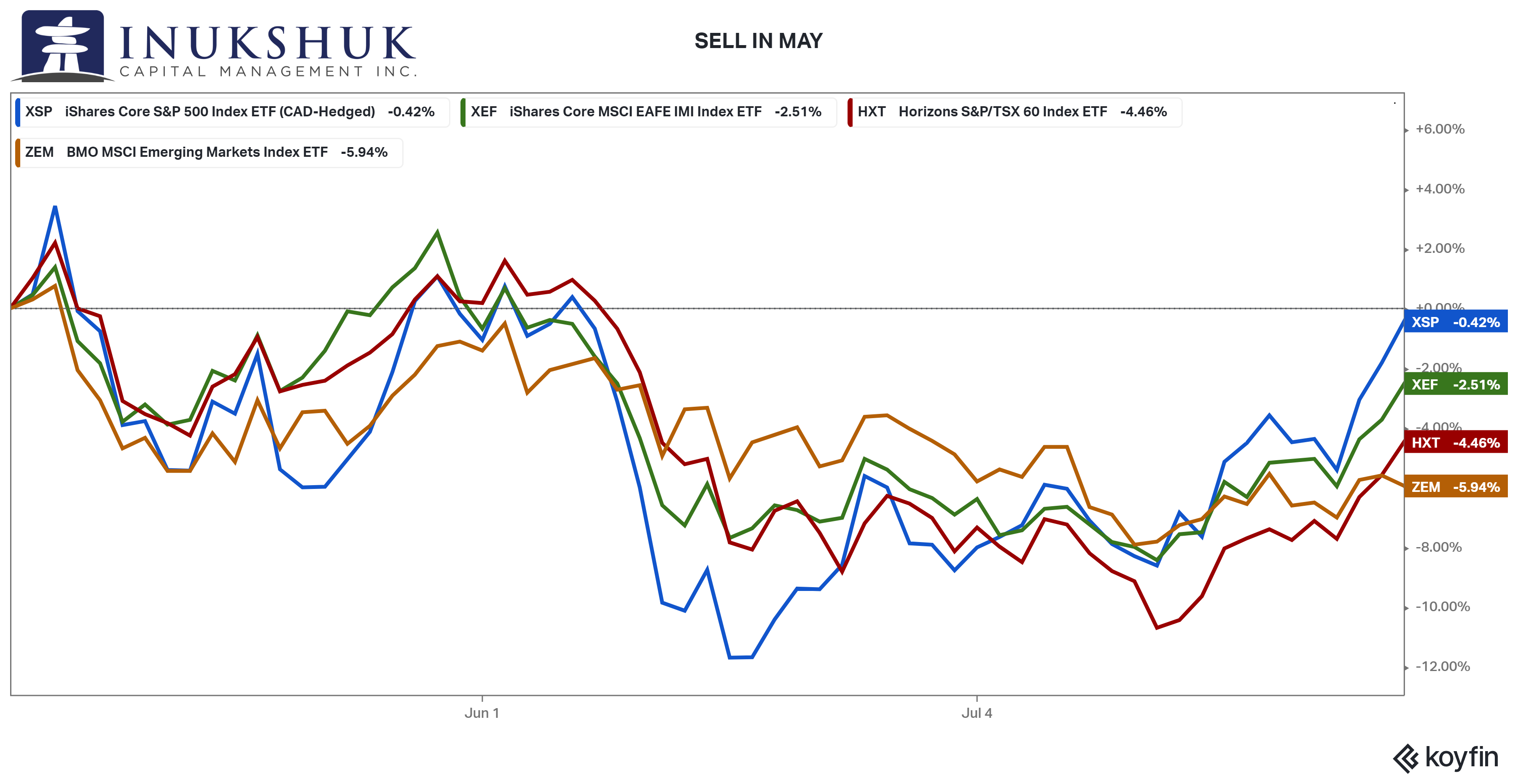 It worked this year, but it is not a very robust indicator to develop a rules-based system to implement in the real world. Our models are based on trends and if those trends are considered reliable, we will re-enter the positions that were sold in May. We won’t wait until November. The second part of the saying might be a more successful strategy, if you have the means.

One of the motivations behind our active program is based on simple math. If you lose 50% on something, it has to go up 100% before you are back to where you started. So, if you can avoid some of the drawdowns on a portion of a portfolio, capital will be preserved to deploy when the coast is clear.

There is a well-promoted theory that if you miss the best 10 days in the market, your returns will be harmed over time. The conclusion is that buy-and-hold is the best way to invest. To be clear: our active strategies comprise a part of our portfolios, because they improve risk-adjusted returns. Buy-and-hold is simply the longest trend-following strategy there is, and we have that as a component of our investment process – this is diversification across strategies – because, eventually, all strategies will struggle in certain environments.

But let’s flip the idea around. What if you are able to avoid the worst 10 days in the market? Here’s the answer. We ran the numbers for the TSX Composite over the past 10, 20 and 30 years, and confirmed that if you miss the top 10 days, your returns will suffer relative to simply holding, or as the kids call it, the HODL strategy (crypto investing for the long-term). But if you were able to avoid the worst 10 days the difference in returns is staggering.

If only there were a magical formula to solve this problem, but there isn’t.

A gap is when the market opens up or down relative to its prior close. There has been some analysis that shows if you simply bought the S&P500 at the close and sold it on the open you would be a genius and outperform the market like a champ. This is also partly true but running backtests is much different than trying to trade the unicorn theory you discovered.

So, once again, let’s look at the other side of the coin. 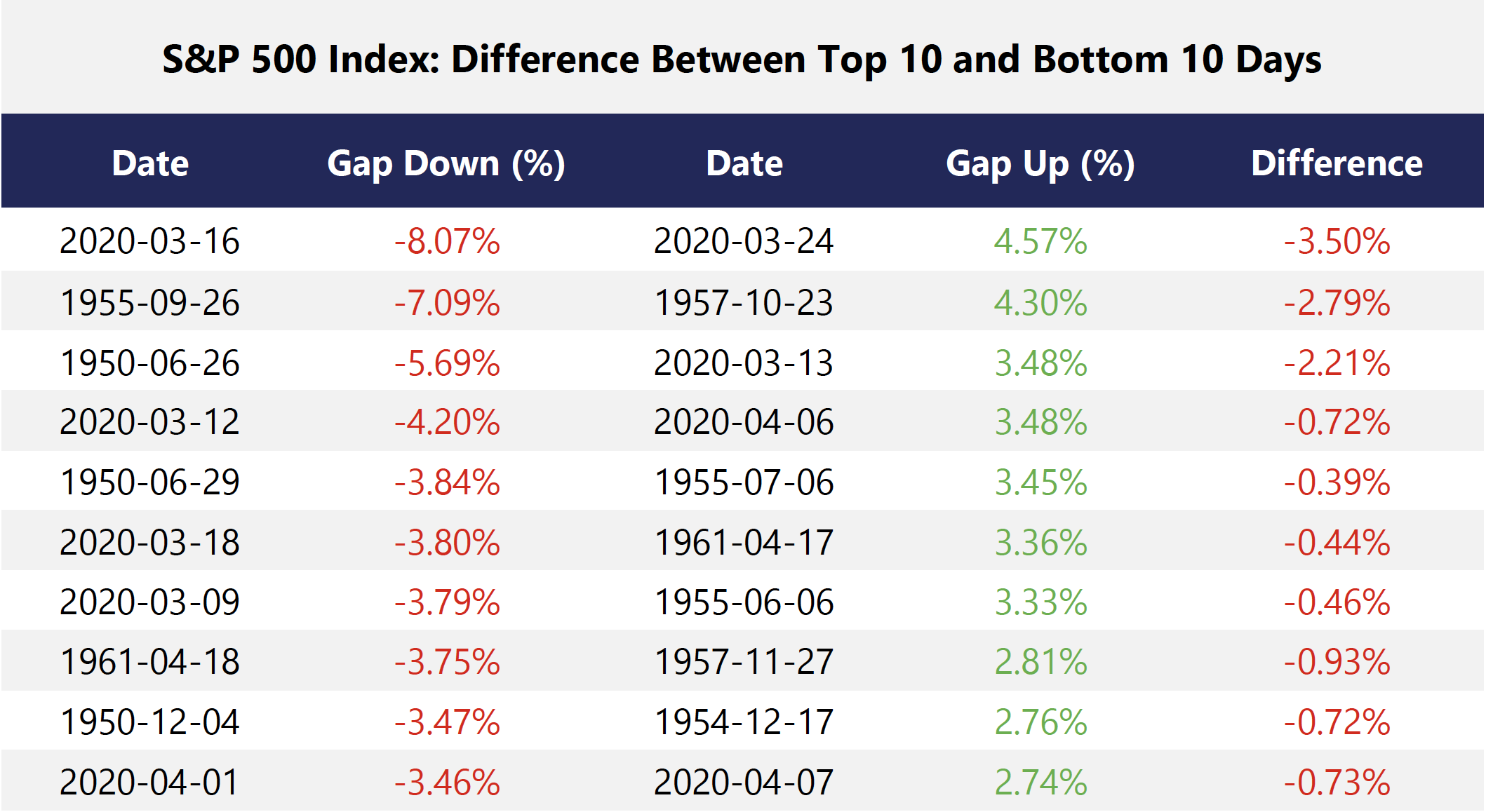 Not sure what we’re missing, but every single worst gap down is bigger than any gap up – even if you were clever enough to capture the overnight upside for the past 72 years, your downside was worse. How do we reconcile that with the conclusions of the overnight buyer theory or the worst day analysis above?

It’s not necessarily about reconciling anything, because you will notice that many of the worst days overnight are very close in time to the best overnights. That’s called volatility. Also, in markets that are going through these kinds of moves it doesn’t mean an overnight trend will persist during regular trading hours.

The point being: avoiding losses is at least as important as enjoying gains, if you are interested in protecting your money.

In a recent report from David Rosenberg, he states: In light of the recent rally in stocks off the lows, it is also worth noting that recessionary equity market drawdowns tend to last 14 months, on average.

The takeaway is that this statement is rooted in the premise of a recessionary economic environment. How does this look for Canada? 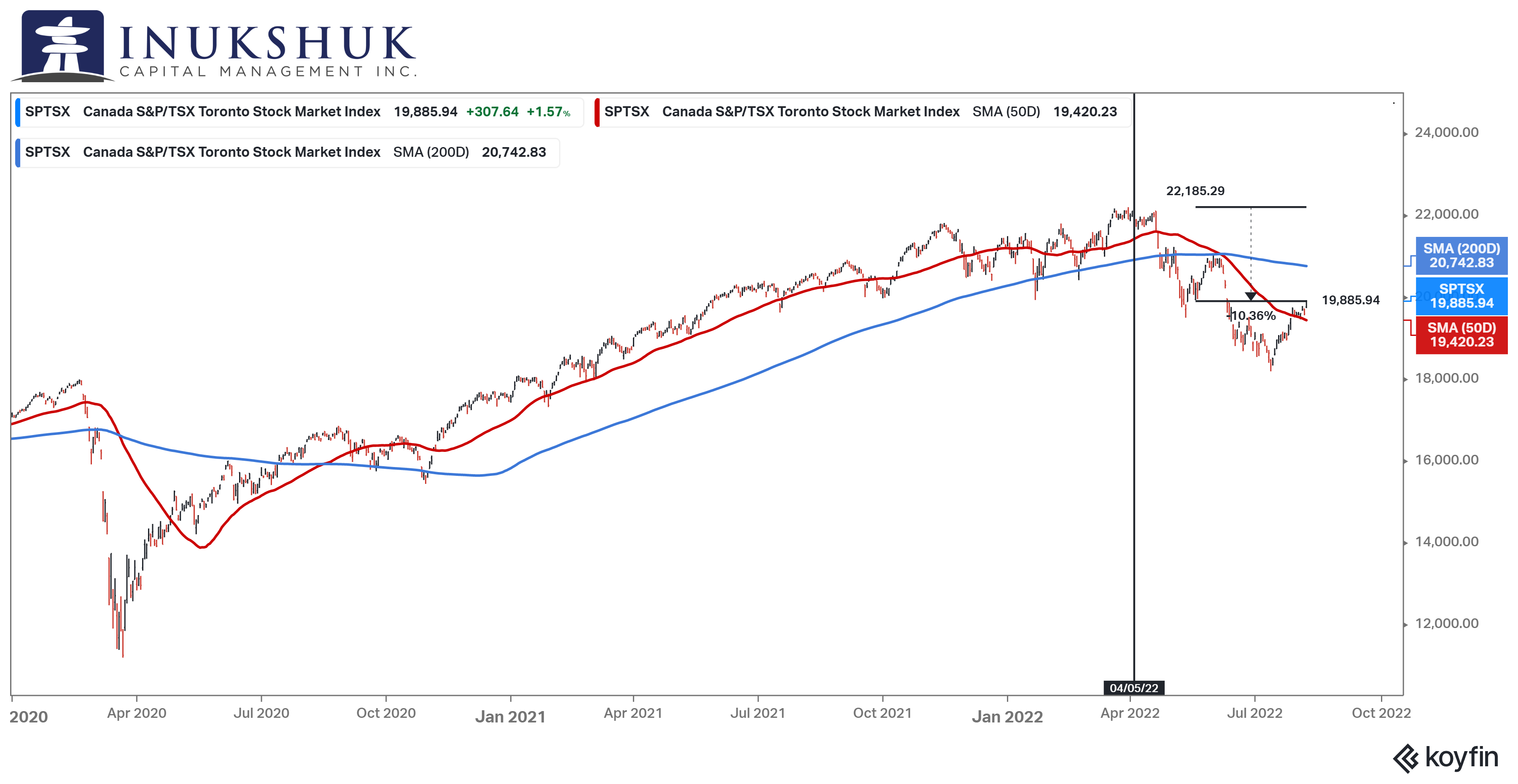 April 5 was the all-time high in the S&P/TSX Index. That was four months ago. After the early-August rally, the index is now down 10% from that high. Is there more to go is the question. So, let’s look at a somewhat reliable indicator of a potential recession. Note: no one indicator gives total insight into economic outcomes, but the bond market is one place to look for a clue.

On July 13, the Bank of Canada surprised the market by raising its target interest rate by 100 basis points to 2.50%. At that time the 10-year government of Canada bond was yielding 3.10%. It’s now yielding 2.68%. That is a big move. This is despite headline inflation (CPI) of 8.1%. Generally, historically, inflation is trouble for bonds. 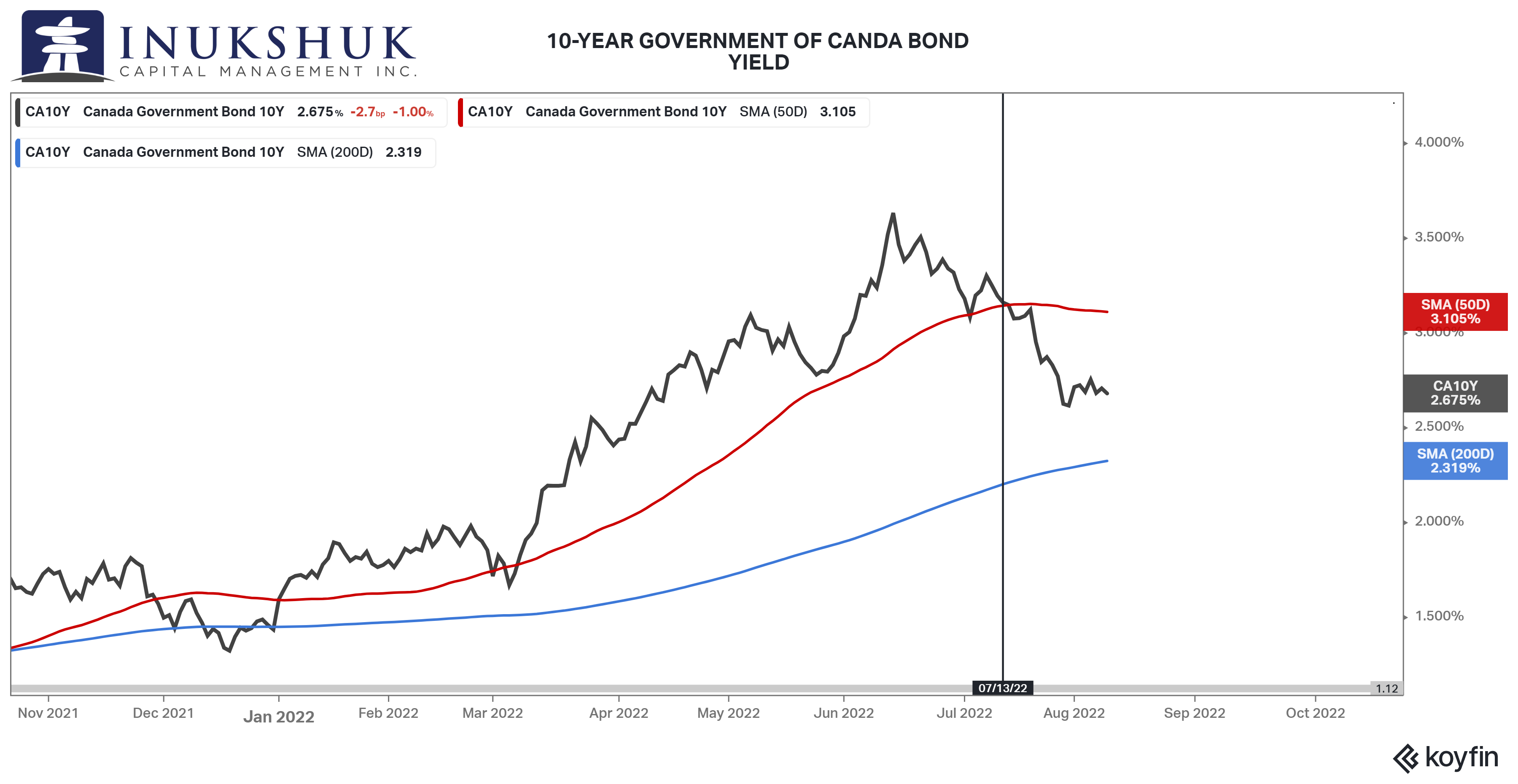 But back to the ‘indicator’, which is the shape of the yield curve. The shape is the comparison of short-term rates to longer-term rates. In ‘normal’ times, this curve is upward sloping, meaning longer-term rates are higher than shorter-term rates. It makes sense, and has been analyzed endlessly, and so on, in order to explain why that is the case. When the curve is inverted, there are better than 50/50 odds that the bond market thinks the economy is headed into a recession.

One measure of the yield curve is the spread between 2-year and 10-year interest rates (2s10s). We like prices over here, so let’s take a look. 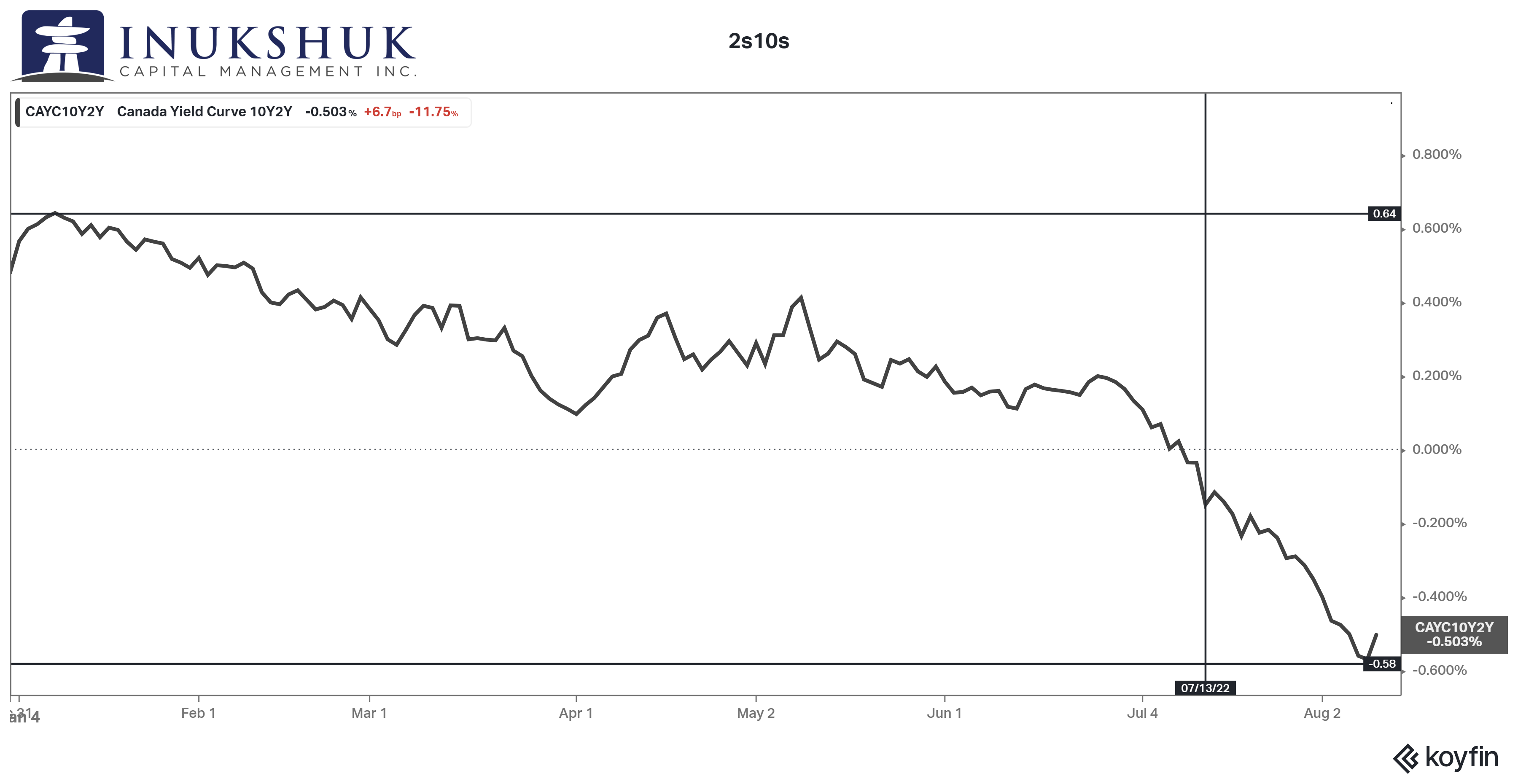 Earlier this year, this curve was at positive 64 basis points (upward sloping yield curve), 2s10s have now done an about-face and recently made a low of negative 58 basis points. And, roughly 40 of those were after the Bank raised rates. Once again, this is in an environment with headline CPI of 8.1%. It seems Mister Bond Market is willing to accept negative real yields (the difference between inflation and the nominal yield on bonds) for reasons probably only explainable in the rearview mirror – this suggests the market is pricing in a recession, or worse.

Does that mean the 14-month countdown started in April or in January when the S&P500 made its all-time high? Nobody knows nuthin. But it is fun trying to figure it out.

So here we are, trying to avoid losses and make money at the same time in an environment that we described as historical in our last note, but could also easily adopt the moniker of confusing. Historically confusing?

Regardless, we trust our process, try to avoid the noise and keep working to improve both of those things.

If you leave it to me

Yeah, if you leave it to me

It’s a certainty Ric Ocasek was not referring to central bankers.

Since the start of the pandemic, I’ve seen a number of clients with increased neck and shoulder discomfort and, in some cases, hunched shoulders. The use of laptops and smartphones, combined with poor posture, are culprits of this tension. With more time spent at home over the last two years, many of us have been sitting and connected to our devices ten-fold.

But poor posture can lead to longer-term health concerns, such as chronic pain and breathing issues. The good news is, we can improve our posture by incorporating a few simple movements into our daily exercise regime. Now, seems like the opportune time to do so.

Below are a few stretches you can do throughout the day to help keep your shoulders relaxed and your posture upright:

Working to keep yourself upright now will help defer any posture problems that tend to occur as we get older.

‘To sustain it, you must maintain it’
Victoria Bannister
ICM Health Ambassador