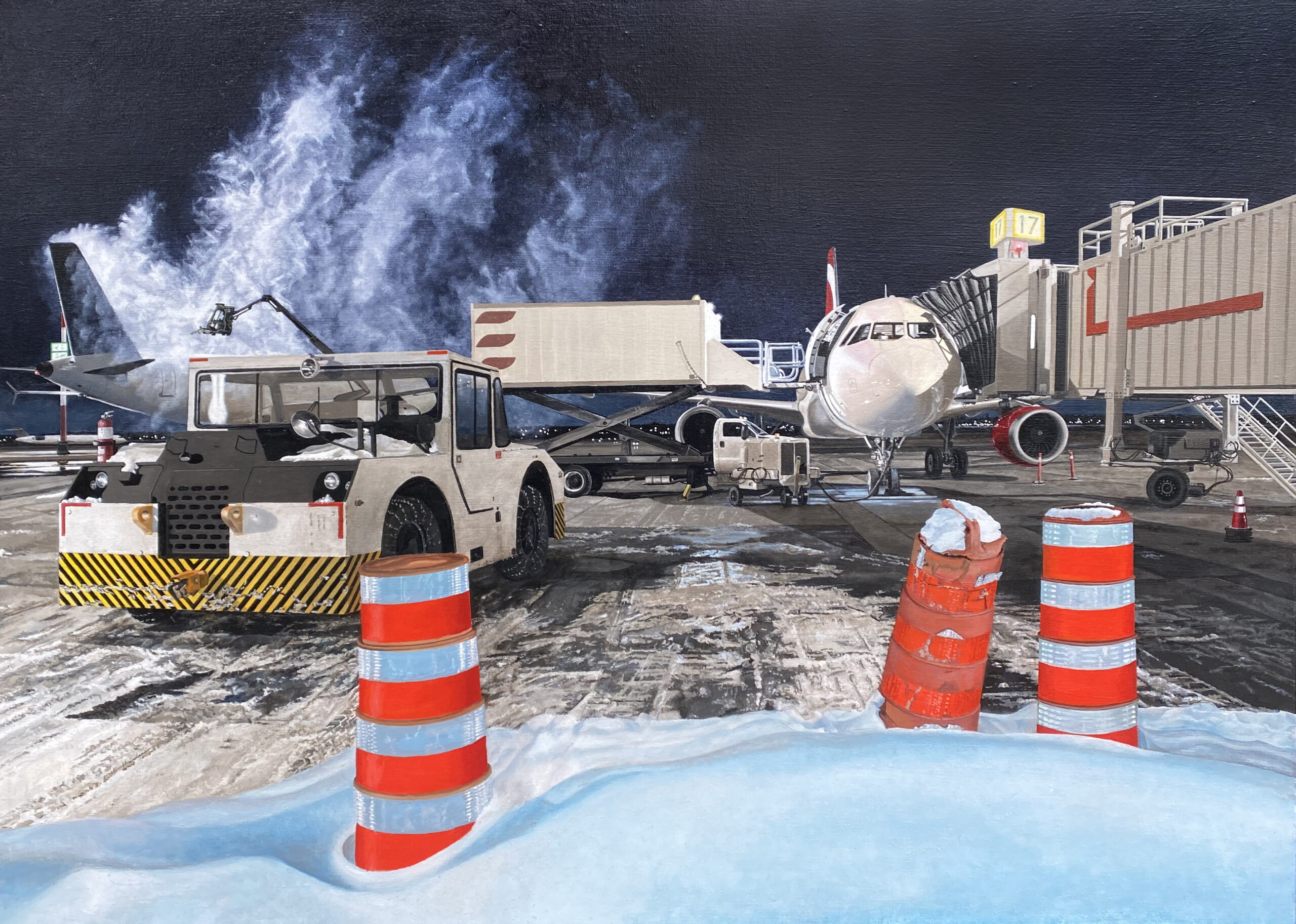 It looks like the ‘Santa Claus Rally’ was postponed. MSCI Emerging Markets and EAFE (Europe, Asia the Far East and Australasia) continued to outperform North American stocks in December however all four indexes were down. The S&P 500 and S&P/TSX60 gave up all of the gains from November but have managed to climb above those levels over the second week of 2023. 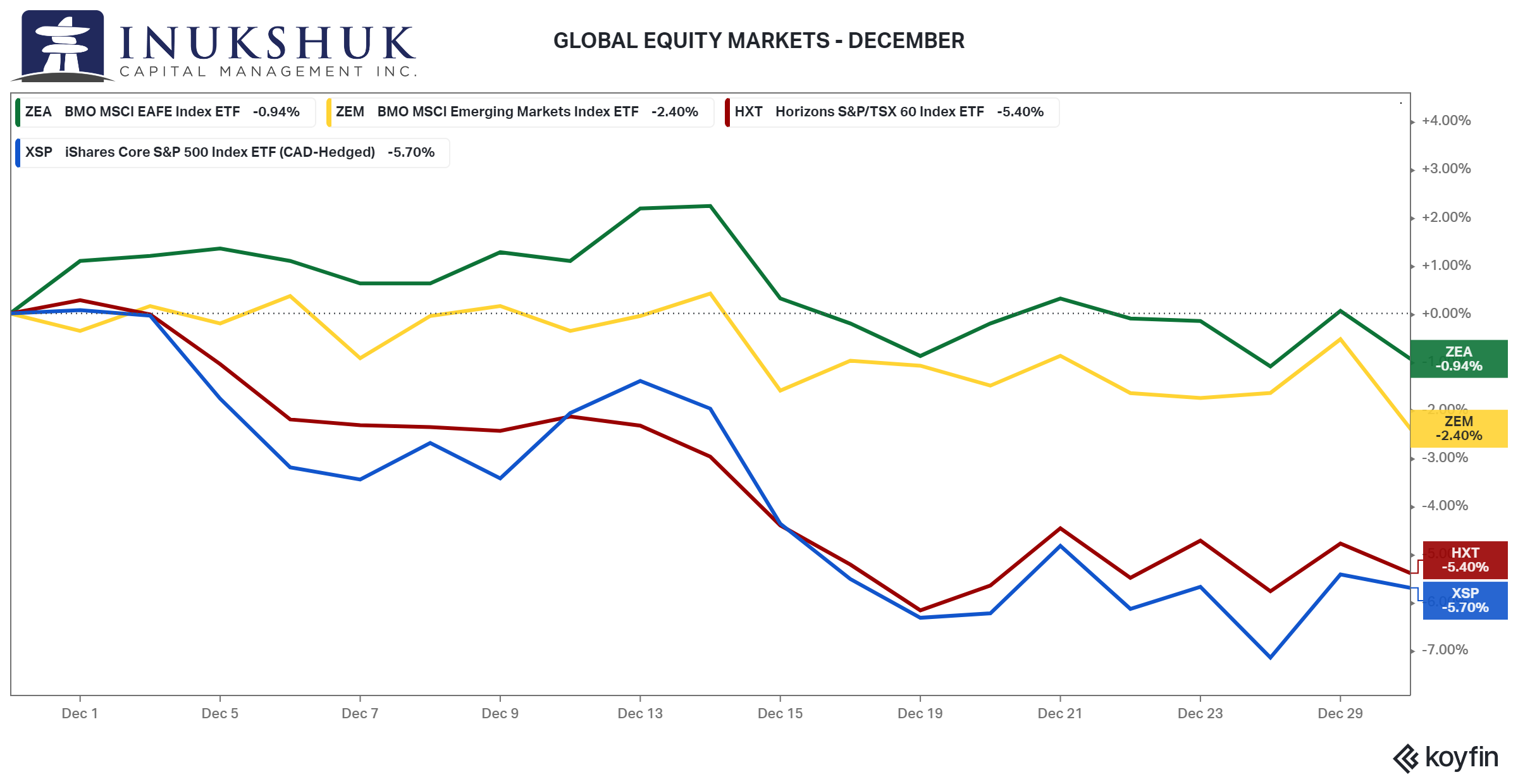 2022 will be remembered as the year classic asset diversification failed. Long-term government bonds in both Canada and the United States performed worse than the broad equity market indexes. 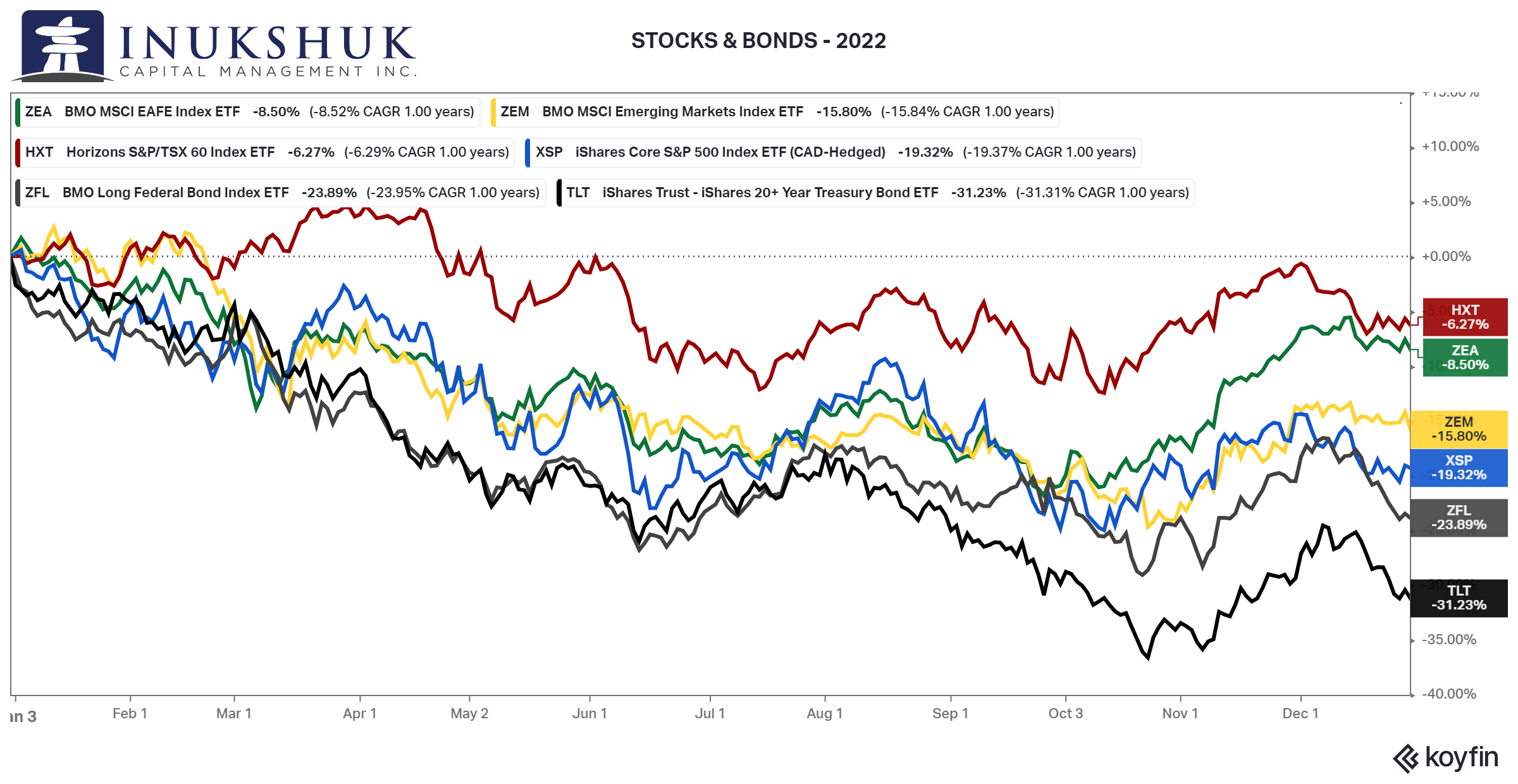 Our systems remain long the S&P 500, S&P/TSX60 and Emerging Markets.

Last year was a difficult one, from the perspective of watching the markets on a day-to-day basis (something not recommended unless it’s your job). In order to test the idea of how gloomy it was, the question posed is: how many days were equity markets up versus down? Because it sure felt like there were more losing days than winners – maybe more so than 2008.

We looked back at the S&P 500 to just before the global financial crisis to see if that was true. 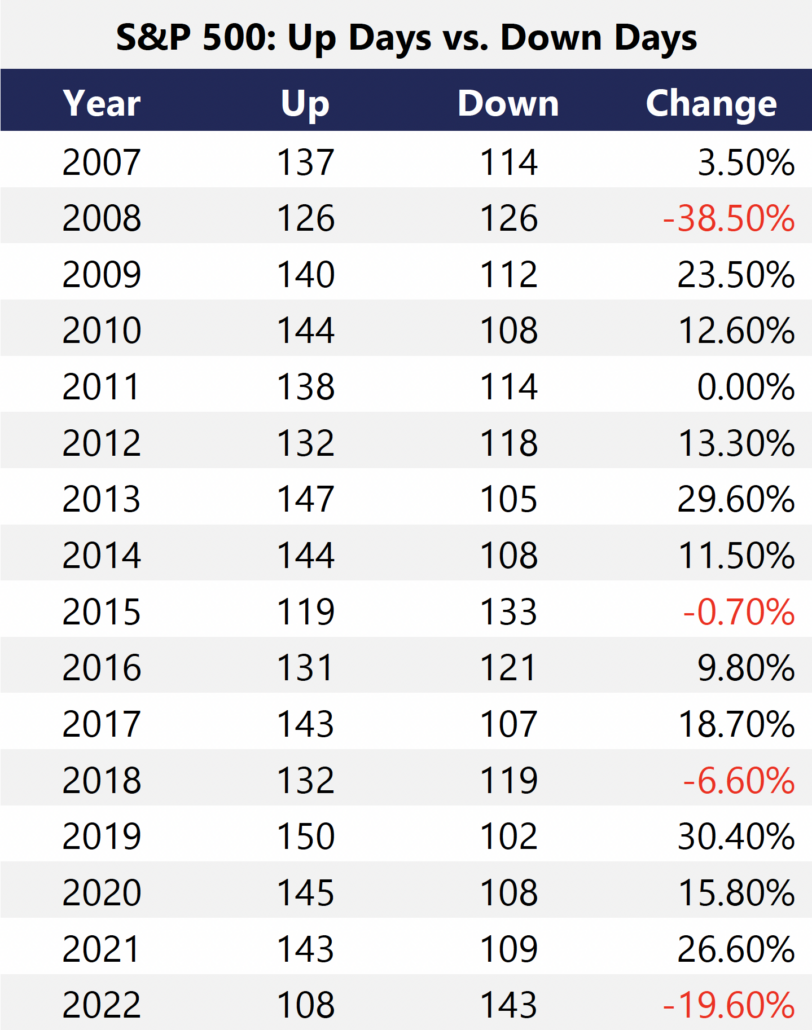 Last year the S&P 500 had more down days than any of the prior 15. Even 2008, which was the worst one year performance in this sample, didn’t have as many. In fact there was an equal amount of up and down days. In 2022 there was roughly a 57% chance it was going to be a bad day.

That’s the stock market. What really hurt investors was the combination of the downturn in equities and the meltdown in fixed income. According to Bianco Research LLC this resulted in the worst combined total return of stocks and bonds since 1802. The red dot is 2022. 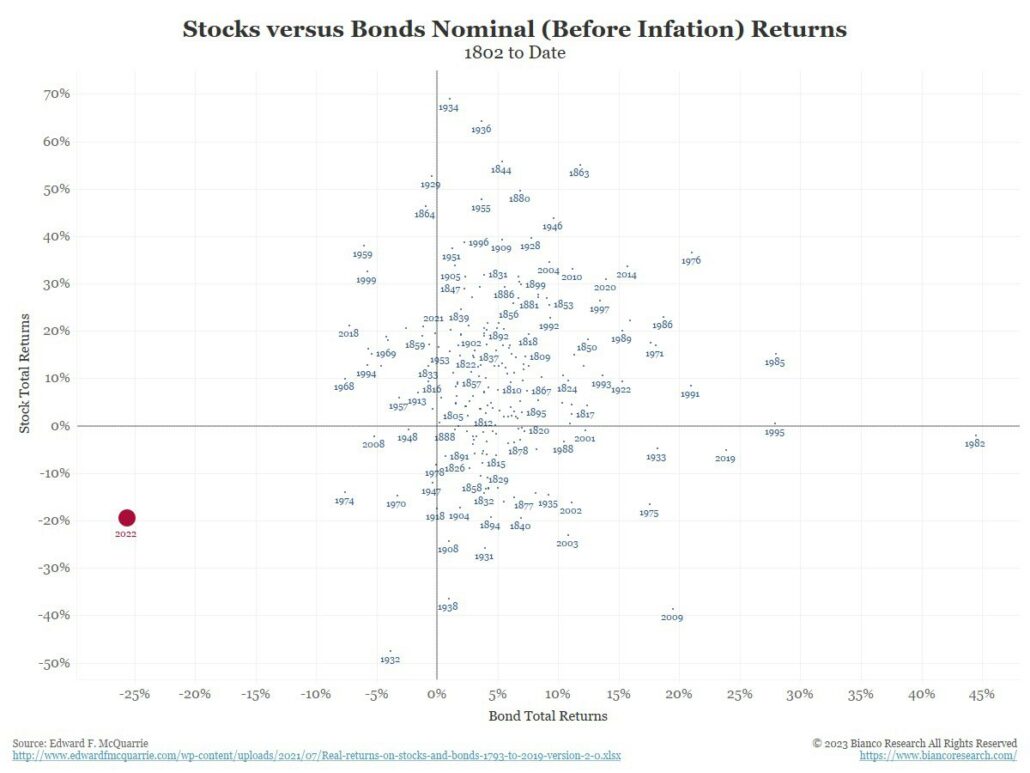 Another way to look at it is in terms of drawdowns. That’s simply the peak to trough change. 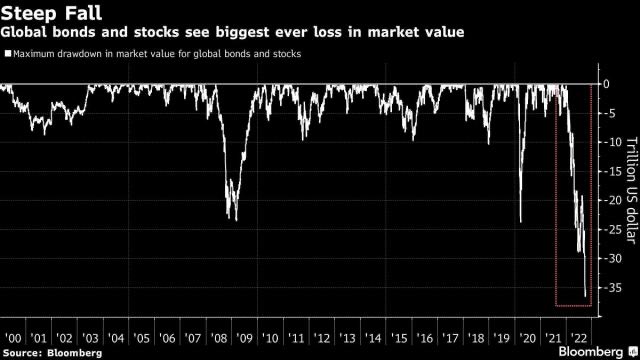 That is a lot of trillions. According to Bloomberg, 2022 was the worst year ever.

To misuse a Tragically Hip lyric: I never saw someone say that before.

This letter isn’t meant to depress our readers. It’s more about trying to quantify the markets and put them into some kind of historical perspective. Maybe there is a clue in the data that can help us understand where we are relative to previous selloffs. 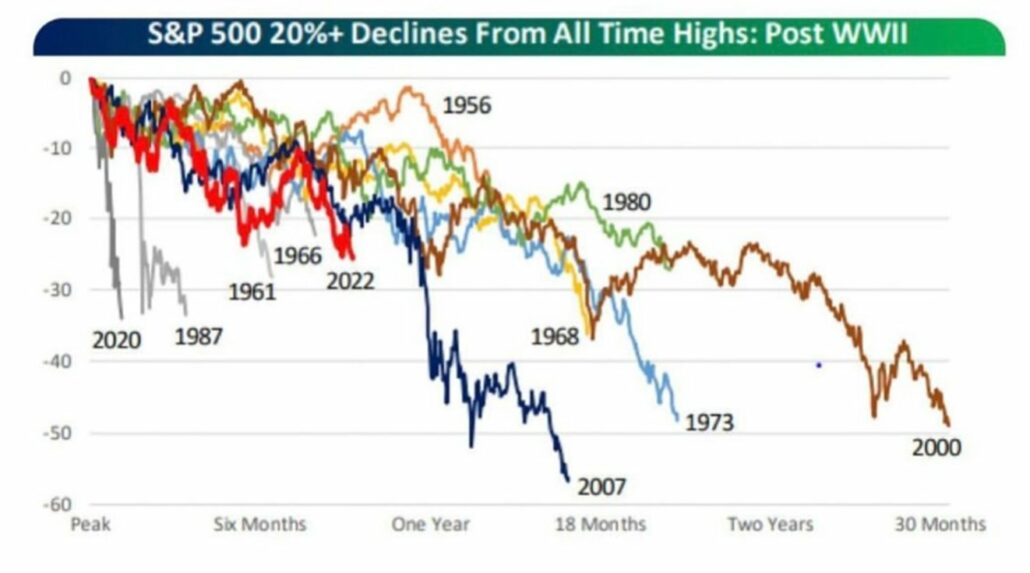 Interpret this as you may. While it is hard, if not impossible, to predict the future consistently and accurately we do know that all trends eventually come to an end. Our systems are currently constructive on three of the four broad equity indexes we invest in and we will let price guide our asset mix. It’s important to have a plan to manage the risk in your equity holdings and stick to it, regardless of market conditions.

Last year was challenging, it’s important to keep things in perspective and follow the process. As always, we recommend considering the importance of overall health and well-being in addition to financial health.

Let’s see what Victoria has to say about maintaining that.

You’ve heard us refer to the concept of longevity at Inukshuk. We believe it is a worthy pursuit and something that is within our control. Last month, we discussed some of the findings from Dan Buettner’s research on the “blue zones” – regions around the world where people have significantly longer life spans than the average. In these regions, spirituality is a common trait. Spiritually inclined people are more likely to be happy people, so I was interested to learn why Finland has consistently been ranked as the happiest country in the world.

The World Happiness Report, produced by the United Nations Sustainable Development Solutions Network, ranks 156 countries according to their happiness levels. According to the most recent report, the happiest country in the world is Finland, followed by Denmark, Switzerland, Iceland, and Norway.

What makes people in Finland so content with their lives? Frank Martela, a PhD researcher, has identified three things that Finns do not do that contribute to their happiness:

As we kick off the new year, it’s worth considering what makes us happy. Whether it be spending time in nature, resisting the temptation to compare ourselves to others, or doing something kind for a stranger, evidence suggests that these things work. We wish you a happy and healthy new year!

‘You have to sustain it, to maintain it’